Two Augusta fire trucks have been involved in accidents where the vehicles overturned in less than a week’s time.

The most recent accident occurred Saturday Jan. 21 around 9:25 p.m. at the intersection of Old Waynesboro Road and Neely Road.

According to Augusta Fire Department spokesperson Zaria Corvo, the vehicle involved was a tender, or tanker vehicle, which left the roadway at the intersection and overturned while en route to a first responder call.

The driver of the tanker, who has not yet been identified, suffered minor injuries.

“The firefighter that was driving was transported by AFD MED 4 to Augusta University for evaluation and later released,” Corvo said in a text statement.

The fire department’s HAZ-MAT team was dispatched to the scene to clear a minor diesel spill that occurred in the accident, according to Corvo.

The other roll-over accident that badly damaged a ladder truck happened on Jan. 16. That accident occurred at the on ramp to I-20 at Washington Road and resulted in three firefighters suffering minor injuries.

“Vehicle 1 was traveling westbound on Washington Rd (GA-28) at its intersection with Interstate 20 WB ramps (exit 199). The driver of vehicle one was responding to an emergency call with his lights and sirens active. The driver of Vehicle 1 stated that he was attempting to make a left turn onto the Interstate 20 WB on ramp and the brakes locked up. Vehicle 1 began a slight counter clockwise rotation while making the left turn and struck the curbing and overturned onto the right side. The Officer observed multiple tire marks indicating braking and slight rotation. The Officer’s investigation determined that the driver of Vehicle 1 was traveling too fast for conditions; angle of turn and weight distribution of vehicle one. Post crash data recorded by body worn camera. 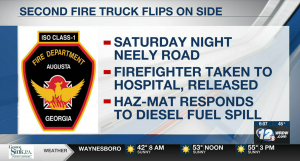