SAN FRANCISCO (KRON) — Twenty-five people and three pets are displaced, and one firefighter is injured after a two-alarm fire broke out early Sunday morning in San Francisco’s Hayes neighborhood, according to San Francisco Fire Department.

Shortly before 2 a.m., a first-alarm fire was reported at a residence on Hayes Street. After it was later upgraded to a two-alarm fire, two other residences were affected, SFFD said.

The fire was under control shortly before 3 a.m. Twenty-five people are now displaced along with three pets, and one firefighter was injured but later deemed “okay,” officials said.

Red Cross Northern California is helping those who were displaced. The cause of the fire is currently under investigation. 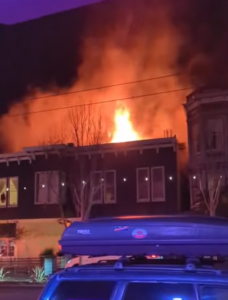