One person is at a local trauma center after driving into a parked fire engine at a high rate speed early Tuesday morning in Stuart.

First responders were working at a crash on Interstate 95 near mile marker 90 and the fire engine was parked at an angle to protect crews from passing drivers.

A driver in the right lane slammed into the back of the engine at a high rate of speed, according to Martin County Fire Rescue.

No firefighters were injured, but the driver was taken to a local trauma center.

Fire rescue reminded drivers to “slow down and pay attention” when first responders are around, yield to emergency vehicles and move over when passing scenes on the shoulder.
https://www.wpbf.com/article/florida-martin-county-fire-engine-trauma/42041146
Find more on the Martin County Fire Rescue Facebook Page 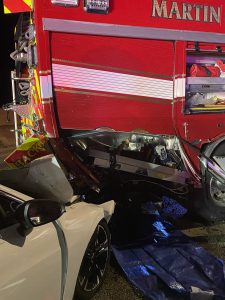