The fire started around 4 p.m. this afternoon, police evacuated people from the blaze, but five firefighters had to be hospitalized due to heat exhaustion.

Aside from the hotel, Andy’s Place Bar and Grill and the Battle Alley Arcade Antiques Mall, all took on major damage.

More than a dozen fire crews from Oakland and Genesee counties responded to the fire.

Officials believe the fire began in the back, near the arcade antiques mall.

“It was pretty intense flames, that appeared to be the origin,” said Police Chief Jerry Narsh. “You’ve got 1800s construction, dry wood, a hot day and we actually had some very high winds and it didn’t help the firefighters today try to squash these fires.” 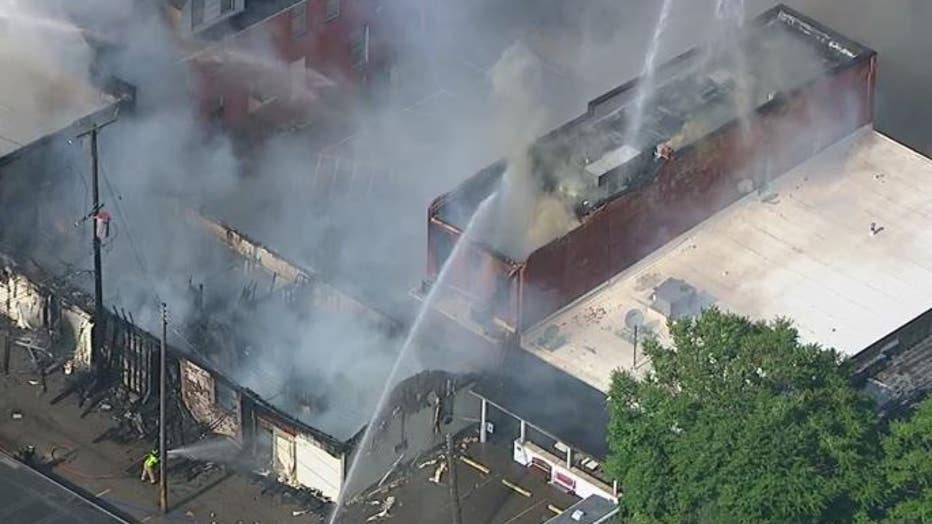 “It’s a labor of love,” she said. “It’s been very difficult watching it, kind of disintegrate.”

At one point Consumers Energy had to cut power to the area because at one point the fire brought down a power pole.

Buildings that were not hollowed out suffered smoke and water damage.

No official cause has been given yet.

“With a fire like this, it travels from building to building,” he said. “Because the fire spreads so rapidly and where you have a building that’s connected, you have the possibility of that fire going right across the top of the brick walls into the next building.

“This is every town’s worst nightmare to have a fire in your historic downtown. It is very tragic what happened, we are very fortunate that it was just limited to the three or four buildings that it was.”