A Moore County woman was injured while being rescued from a condo fire Saturday night.

Firefighters responded to a two-story condominium at 132 Old Course Road at about 10 p.m. and found heavy flames and smoke coming from the building as well as a wooded area around the complex.

Lt. Logan Deberry with the Aberdeen Fire Department looked up and saw a man and woman attempting to escape through a second floor window while yelling for help. He climbed up his ladder, keeping his cool as he moved toward the heat of the flames.

A misstep caused Deberry to lose his footing as he tried to bring the woman to safety.

“[We] ended up going off the side of the ladder, me and the victim,” he said.

The incident was Deberry’s first rescue.

“This is why we do what we do, to make sure everybody’s safe and everybody goes home at the end of the day,” he said. 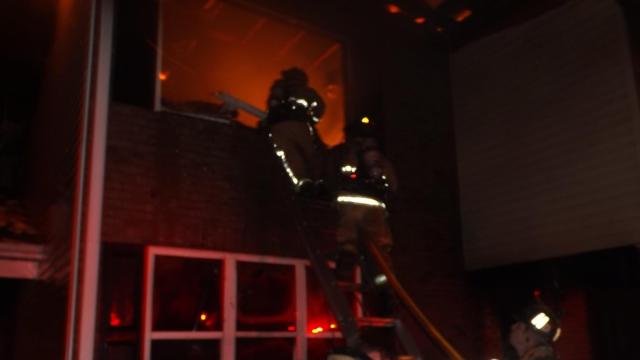 The woman, who was in her 20s, was taken to First Health Moore Regional Hospital for treatment. In a Facebook post, she said she fractured five vertebrae and a rib in the fall.

A second firefighter went up the ladder to rescue the woman’s boyfriend, who was treated for smoke inhalation.

A third resident, who lived on the ground floor of the building, escaped on his own, but his condo was destroyed.

The fire, energized by the wind, lashed at a separate building, melting the blinds in Robert Marvez’s bedroom. He said he’s proud of the firefighters who responded to the blaze quickly.

“And grateful, honestly, because they rush in and they save lives and they kept my apartment from going up in flames too,” Marvez said.

Authorities said the fire was accidental and started in a carport, but investigators are still working to determine the exact cause.