WATERTOWN — Fire Chief Matthew Timerman is not satisfied that state fire administrators have not initiated an internal investigation into how city firefighter Peyton L.S. Morse died after he suffered a medical emergency while training at the state fire academy in early March.

Stressing it’s been five months since the young firefighter died, Chief Timerman said Wednesday he’s requesting that the state Office of Fire Prevention and Control immediately begin an investigation into what led to Mr. Morse’s death.

He sent a letter on Tuesday to acting state fire administrator James Cable, who oversees the state fire academy, for the state to stop “stonewalling” the investigation and provide answers to what happened. 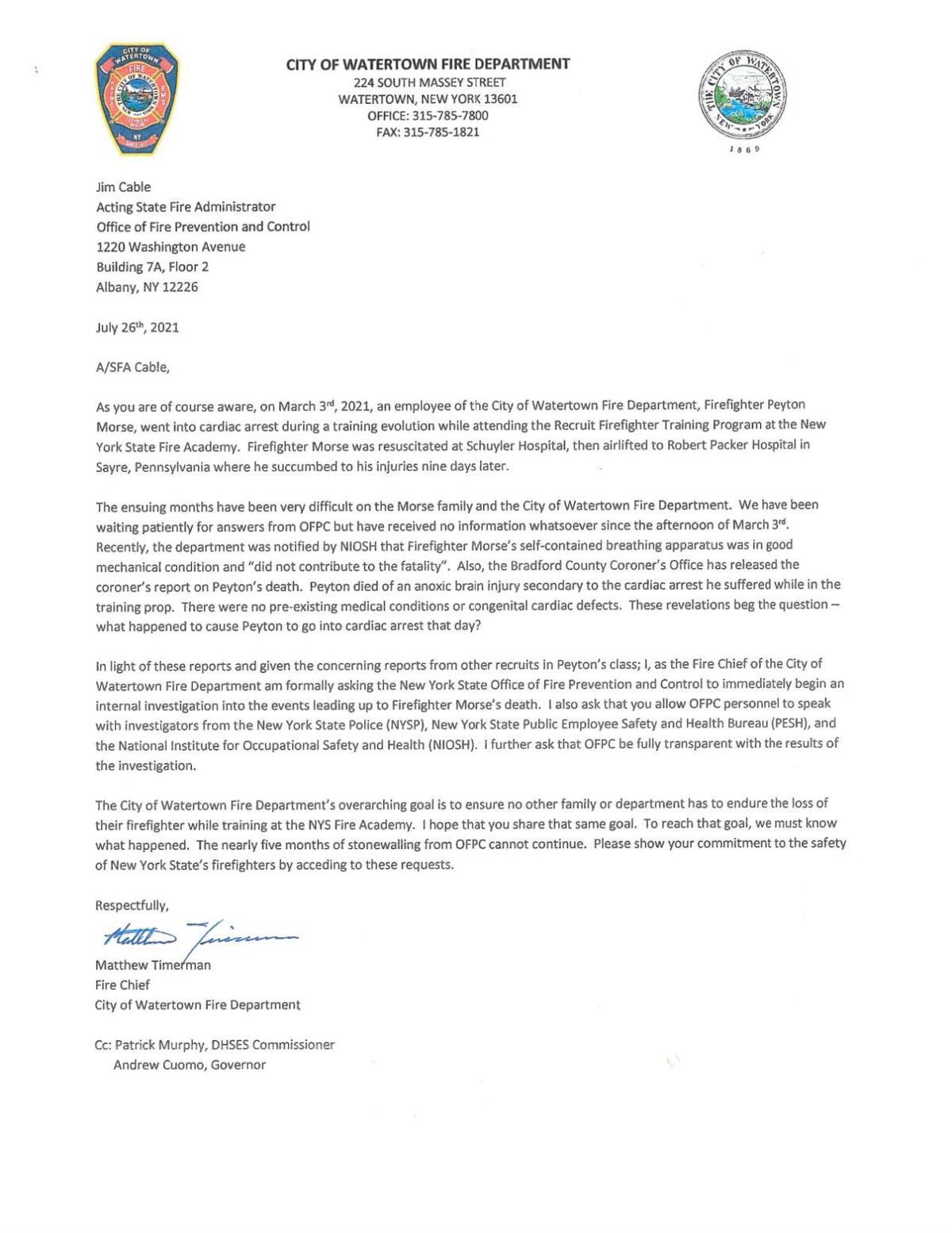 His frustration has grown further since learning this week that Mr. Morse’s manner of death was ruled as the result of natural causes.

According to a news release Monday, the Bradford County Coroner’s Office determined the cause of death was an anoxic brain injury (lack of oxygen to the brain), cardiac arrest and consequences of physical exertion while using a Self Contained Breathing Apparatus – or SCBA – during training at the New York State Academy of Fire Science on March 3.

But the coroner’s office could have come up with five conclusions to how Mr. Morse died — suicide, homicide, accidental, natural or undetermined. The chief doesn’t think that “natural” fits in with what happened, stressing it doesn’t seem logical since the firefighter was healthy and the air pack was in good working order.

In the five months since Mr. Morse’s death, Chief Timerman said that he hasn’t received any information from the state about what happened.

It’s also disturbing that the state’s attorneys have told both fire administrators and fire academy instructors not to cooperate with a state police investigation and other probes by other agencies, he said.

“It seems to be the state is in no rush to investigate the matter,” he said.

At a meeting of career fire chiefs in May, a state fire administrator told him that state attorneys have instructed fire prevention staff not to ask any questions about what happened.

“The state may want to protect itself from lawsuits, but this isn’t right,” he said. “My take is that they don’t want to find the answers.”

State attorneys have instructed no one with the state talk to the National Institute for Occupational Safety and Health, or NIOSH, and the Public Employee Safety and Health Bureau, or PESH, which are conducting separate and different investigations, he said.

Since the incident, Chief Timerman has informally talked to between 30 and 40 fire chiefs from across the state, some of whom told him that they heard recruits might have been treated inappropriately at the fire academy in the past.

Recruits might have been the victims of hazing, verbal abuse or inappropriate physical interaction, he fears. He has also obtained documents about what other recruits witnessed the day Mr. Morse became unresponsive.

Several fire departments immediately pulled their recruits from the academy after hearing from their recruits how instructors handled training and the incident. Some instructors also were instructed to stop their involvement in the training, which continued until that session was completed weeks later.

The firefighter was inside a 20-foot-long tunnel made of plywood while wearing an air pack and a mask covered with tape when the incident occurred.

Mr. Morse was going through the tunnel that simulates what a firefighter would experience during a fire. Alarms on the self-contained breathing apparatus went off before the firefighter was found not breathing.

The firefighters’ parents “have been very frustrated for the past five months and continue to be very frustrated” in the way the state has handled the incident, Chief Timerman said.

In responding to the fire chief’s comments, the state Division of Homeland Security and Emergency Services, which oversees the state office of fire protection, issued the following statement:

“There are several independent investigations surrounding the death of Firefighter Peyton Morse which members of the State Office of Fire Prevention and Control (OFPC) are already participating in. As we have communicated to the Watertown Fire Department and to the press over the past five months, OFPC has and will continue to be fully cooperative throughout the course of these ongoing investigations. The insinuation that OFPC is not allowing personnel to speak with investigators and the allegation that they are “stonewalling” is false and any suggestion otherwise would be factually incorrect.”

The state said that OFPC is participating in the investigations by state police, NIOSH and PESH.

State Homeland Security will not comment any further on the firefighter’s death until after the investigations are completed.

The training-related death of Mr. Morse is the only one that has occurred at the state fire academy in its 50-year history at Montour Falls.