In our focus to not forget the Chicago & Pittsburgh losses, there are two other major “Valentines Day” multi-Firefighter losses that we want to share with you as well:

2/14/1958 The above 6 Manhattan, NY, Firefighters died at the Wooster Street Collapse, Box 55-334, 137-9 Wooster Street, between West Houston and Prince Street. “Two-FDNY firefighters venting the roof, and four member of Fire Patrol # 1 placing salvage covers were buried alive when all floors and the roof suddenly collapsed in a burning six-story, 80×100 foot, heavy timber construction, loft building in “Hells’ hundred acres” lower Manhattan. The fire occurred at 10:15 p.m. in a baled paper storage building. The fire started on the first floor and traveled up the shaft to the top floor. Floors 2 to 6 and the roof collapsed in the one-hundred-year-old, commercial storage building that was constructed with cast iron columns on the lower floors supporting heavy timber, wood columns and wood girders on the upper floors. The age of the building, overloaded floors (heavy storage of large rolled paper), fire destruction, water weight from hose streams, failure of cast iron columns contributed to the collapse. 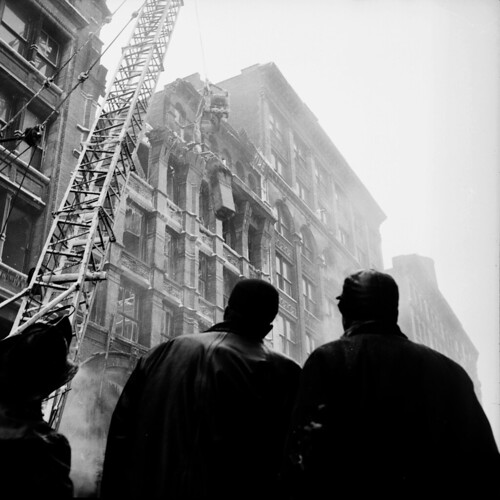 This fire lead to greater understanding by Firefighters and Officers of “fast food” construction. (See training resources below for use at your department)

TX two firefighters lost their lives in a McDonald’s restaurant arson fire at 12602 Bissonnet. The fire was reported at 4:30 a.m. Engine 76 was the first fire fighting unit on the scene 8 minutes later and reported 6-foot flames visible from the roof. The flames appeared as if they might be venting from an exhaust fan, possibly indicating a grease fire.

Shortly thereafter, a ladder company opened the rear door of the restaurant and made access to the back of the kitchen area. A PASS device had been heard alarming in the kitchen area, and a firefighter was able to see a downed firefighter as he looked into the back door. A firefighter was discovered with his facepiece in-place, his regulator not connected to the facepiece, and with his SCBA partially removed and entangled in wires. He was removed, treated at the scene, in the ambulance, and at the hospital. Despite these efforts, he was pronounced dead at the hospital. Given the amount of time that had passed and the likelihood that a second firefighter was buried in debris, the search effort transitioned into a recovery mode. The missing firefighter was found at approximately 7:13 a.m. within 6 feet of the rear door of the restaurant. She was entangled in wires and a pair of wire cutters were found near her body. She was wearing an SCBA but the status of her facepiece and regulator could not be determined.

Both firefighters died of asphyxia due to smoke inhalation. The fire was intentionally set by a group of juveniles attempting to conceal a burglary attempt. Four individuals were convicted of crimes with sentences ranging from 2 to 35 years.”