Firefighters have located a first responder who went missing after a roof collapse during a house fire. The vacant building is located in the 5900 block of Cote Brilliante. They are now working to remove the firefighter from the building. The firefighter’s condition is not known at this time.

First responders are on the scene. They are working to get the firefighter back to safety and put out the fire.

The building is two stories tall and made of brick. Firefighters report that the roof has collapsed onto the second floor.

Firefighters initially reported that two people were missing. They have corrected that statement to indicate that there was only one firefighter unaccounted for. 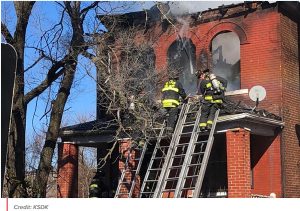