UPDATE: A firefighter critically injured in the Jenners building blaze in Edinburgh has been named. Barry Martin, 38, was one of five firefighters who suffered injuries tackling the flames at the former department store on Monday. 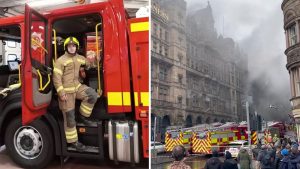 The Scottish Fire and Rescue Service have confirmed that a member of the fire crew tackling the Jenners incident is in critical condition and that several other members are being treated for injuries sustained at the scene.

It has been reported that a firefighter has suffered serious injuries and remains in critical condition after being rescued from the burning Jenners building in the heart of the capital.

Emergency services including the Scottish Fire and Rescue Service, Police Scotland and the Scottish Ambulance Service were called to the former department store at around 11:30am this morning.

The building sits on the corner of South St Davids Street and Princes Street and backs onto Rose Street in Edinburgh.

Over twenty fire engines were sent to tackle the blaze and worryingly the fire was raging by the time they had arrived on the scene.

Images and videos from the site have shown black smoke billowing out from the iconic structure all afternoon.

Eyewitnesses have described smoke pouring out of the basement area of the department store.

Ross Haggart, the Scottish Fire and Rescue Service’s Interim Chief Officer, said: “The fire at the Jenners building in Edinburgh is a very serious and complex incident and regrettably I can confirm that five of our colleagues have been taken to hospital for treatment and one remains in a critical condition.

“The families of all those affected have been made aware.

“We currently remain at the scene with a total of 11 appliances and other specialist resources in attendance.”