Crews were called around 6 a.m. to the 100 block of Reservoir Road in Tyrone Township.

Chief Jeff Kime, of the Bendersville Community Fire Company, says there was heavy smoke coming from the rear of the one-story rancher when crews arrived.

Kime says within minutes of arrival, firefighters were inside the lower level of the home when a gun safe collapsed through the first floor pinning two firefighters. That’s when a mayday was dispatched.

After the collapse, the fire spread to the first floor, according to Kime. It took crews nearly an hour to get the fire under control, but not before gutting the home.

Kime says the homeowner discovered the fire when returning home from work. He got his dogs out and called 911.

The cause of the fire is under investigation by the State Police Fire Marshal. 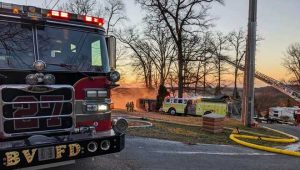