One #IFD Firefighter sustained injuries after an altercation at an IFD Fire Station shortly before 1:00 pm this afternoon. The firefighter was returning to Station 11, located at 1715 E Washington St., backing his fire department vehicle onto the approach, when a woman ran past his vehicle and into the apparatus bay of the station. The woman, in obvious distress, yelled that a man was chasing her. As the firefighter was stepping out of his vehicle, he noticed a man running toward the station. As the man approached, the firefighter stepped in front of the man and told him to stop. The man became aggressive toward the firefighter and shoved him up against his vehicle, injuring the firefighter. The man then continued running into the apparatus bay, where he made physical contact with the woman.
The engine crew, in the kitchen cleaning up from lunch, heard the commotion in the bay and went to investigate. They found a male physically detaining a female inside the bay, with a knife, clearly visible in his hand. The crew called dispatch for police assistance. According to the crew, once the man saw the firefighters, he turned his attention to them and became both verbally and physically aggressive toward the crew. In fear for their own safety, firefighters used appropriate measures to disarm and restrain the man until IMPD arrived on scene. Once the firefighters had the man restrained, they assessed and checked him for any injury. IMPD arrived and took the man into custody, after which he was transported to Eskenazi to be checked out. The woman was unharmed. The incident remains under investigation.
The injured firefighter was transported to Methodist Hospital, checked and released with slight injuries. He was sent home for the remainder of his 24 hour shift. None of the firefighters on the Engine crew were harmed and are still processing the troubling event. 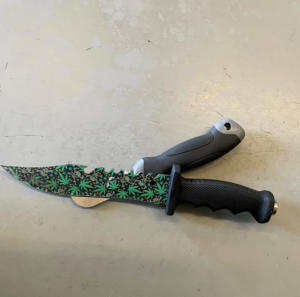