The Carrollton (Texas) FD had a cool idea, design a LARGE trailer (see photos below) that protects their members operating on the scene of roadways. It’s been in service for just a few weeks-and it was struck “in the line of duty” last weekend-doing its job, on its 2nd run ever.
Their unique new mobile barrier trailer “MB-115” saved the lives of Carrollton Fire Rescue Firefighters and Law Enforcement along I-35 this past weekend. The driver that struck the unit wasn’t impaired, but just distracted and apparently driving too fast. The car struck the side of the unit that was parked at an angle. The unique vehicle was designed to deflect impacts which should prevent injuries to the person in the striking vehicle. And, that’s just what happened,
The blocking unit has been in service at Carrollton Fire Rescue for two weeks. Members of the department helped design the unit after seeing an increase in responders struck while they worked along the highway.
MB115 is the first of its kind in the U.S., a mobile barrier purposely designed and built for emergency response. Unlike previous generations of mobile barriers, it is designed to deflect impacts, reducing the chance of injury to those who hit it.
It’s a battleship, weighted by tanks that hold nearly 3,000 gallons of water.  At a total weight of 80,000 pounds, MB115 can certainly take a direct hit, but is deployed at an angle making a direct hit unlikely. MB115 will protect citizens, first responders, and Carrollton’s emergency vehicles.
Here are more details on the crash:
https://www.firehouse.com/apparatus/news/21282031/carrollton-fire-rescue-rig-saves-crew
Here are more details about MB115:
https://z-upload.facebook.com/CarrolltonTXFire/posts/455709889925349
MISSOURI FIRE APPARATUS CRASH:
An Aurora Rural Fire Protection District In Aurora, Missouri, Firefighter was injured in a crash early Monday morning. The apparatus rollover crash occurred on County Road 2200 one mile west of Aurora. Firefighter Gene White (61) was critically injured and airlifted to a hospital in Springfield for treatment. KTIYP’s. 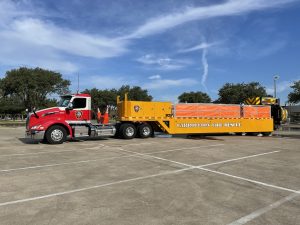 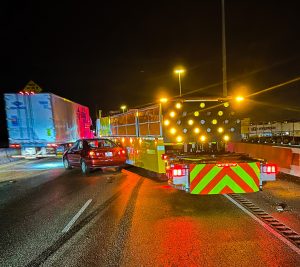 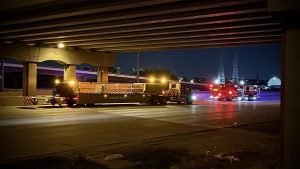 Take Care. Be Careful. Pass It On.
BillyG
The Secret List 9/27/2022-1628 Hours
www.FireFighterCloseCalls.com