In the war-torn Ukrainian City of Bakhmut, the Fire Chief of a small group of Firefighters lines up his small team in front of the national flag, and wishes them a Happy New Year. 11 Firefighters have been killed in the Line of Duty in that region since the beginning of the Russian invasion..

For the nine Firefighters (any more staffing would create a high risk target) stationed permanently in the city centre fire station, it has been a year of war and fire. They are posted in the eastern region of Donetsk where Bakhmut has become the epicentre of fighting. But their Fire Chief Oleksiy Migrin, jovial and good-natured, does not often complain.

“The year 2022 has been tough on a personal level, and tough for Ukraine,” he tells the team.
“Take care of yourself, remember that your families are waiting for you. Next year we will win.”

The nine Firefighters in the barracks can describe their daily routine in a few words…de-mine, evacuate, fight fires, provide water, clear the rubble.
HERE IS THEIR STORY:
https://www.barrons.com/news/a-lot-of-pain-the-battle-of-firefighters-on-ukraine-s-frontline-01672539609?tesla=y
Hopefully this will be the final TSL of 2022, we wish you and those you love a Happy, Healthy, Safe and Peaceful New Year…it’s 2023….wow…
Take Care. Be Careful. Pass It On.
BillyG
The Secret List 12/31/2022-2137 Hours
www.FireFighterCloseCalls.com 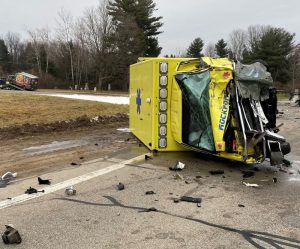