At 5:22 A.M. on Friday, Aug. 13, 2010, Detroit, MI, Central Communications dispatched Engine 38 and Ladder 14, which are located two blocks away, on a still alarm to East Jefferson and Drexel to check for a fire in a building. The location is on the far North East side of the city near Grosse Pointe. Upon arrival, the officer of Engine 38 reported smoke showing from a commercial building and firefighters stretched two handlines. Central then sent the remainder of the box-alarm assignment: Engines 41, 32 and 9; Ladder 14; Squad 6; and Chief 6.

Apparently, the fire was started from the exterior when several cinderblocks were removed. Crews started an interior attack on the two-story, 70-by-50-foot commercial building. An additional line was positioned at the broken cinderblock wall. Chief 6 arrived on the scene, assumed incident command, and requested an extra engine and truck above the box-alarm assignment (Engine 9 and Squad 3). Crews encountered heavy fire and were temporarily forced from the building. Initially, four handlines were stretched. After some of the fire was knocked down from the exterior, crews re-entered the building and continued to attack the fire. Chief 6 requested a second truck (Ladder 6) to the scene for manpower. Ladder 6 used its aerial platform to remove coverings from the second-floor windows. A lieutenant suffered a knee injury when a steel roll-down gate fell on him. Crews then extinguished the fire and performed overhaul. Companies were picked up and went back into service at around 7 A.M.

At 7:14, after companies had picked up from the original fire in the building, Central dispatched Engine 38 and Ladder 14 on a possible rekindle to the same location. Upon arrival, Engine 38 reported a working fire and requested the remainder of the box alarm (Engines 41 and 32; Ladder 14; Squad 6; and Chief 6). Chief 6 arrived on the scene from quarters with the second-due engine and assumed incident command. Chief 6 reported a two-story commercial building, 70 by 50 feet, with fire going through the roof, then requested an extra engine and truck above the box-alarm assignment (Engine 9 and Ladder 31). Chief 6 advised the truck company to prepare for aerial operations on arrival. At this point, heavy fire was showing from the second floor of the building and through the roof. Crews set up and prepared for defensive operations on the building.

At 7:48, Chief 6 reported a building collapse and requested EMS immediately for firefighters down. At this time, Chief 6 requested a second alarm (Engines 50, 58, 23 and 46; Ladders 19 and 6; Squad 3; Chief 9; and Cars 203, 200 and 201). The front portion of the second floor of the building had collapsed, trapping at least three firefighters. Several firefighters apparently ran into the building and were not injured, but the firefighters who were standing on the sidewalk or ran away from the wall were hit by debris. Engine 38 called dispatch, reported multiple firefighters down and ordered “Send everyone here now!”

Crews worked to free the trapped firefighters and prepare them for transport to the hospital. Usually, 24 ambulances are on duty, but three to five are closed at night, depending on manpower. Two firefighters were transported by Squad 6, one firefighter was transported by a Detroit police cruiser and EMS took the rest. Crews continued to operate at the fire for four hours after the collapse. Units cleared the scene after 1 P.M.

The Detroit Fire Department Arson Squad and the federal Bureau of Alcohol, Tobacco, Firearms and Explosives (ATF) are investigating this incident. At presstime, one person had been charged with arson in connection with this fire and the investigation was ongoing.

DENNIS WALUS is an active fire service member and fire scene photographer in the Detroit, MI, area. He is state coordinator for the International Fire Photographers Association (IFPA). 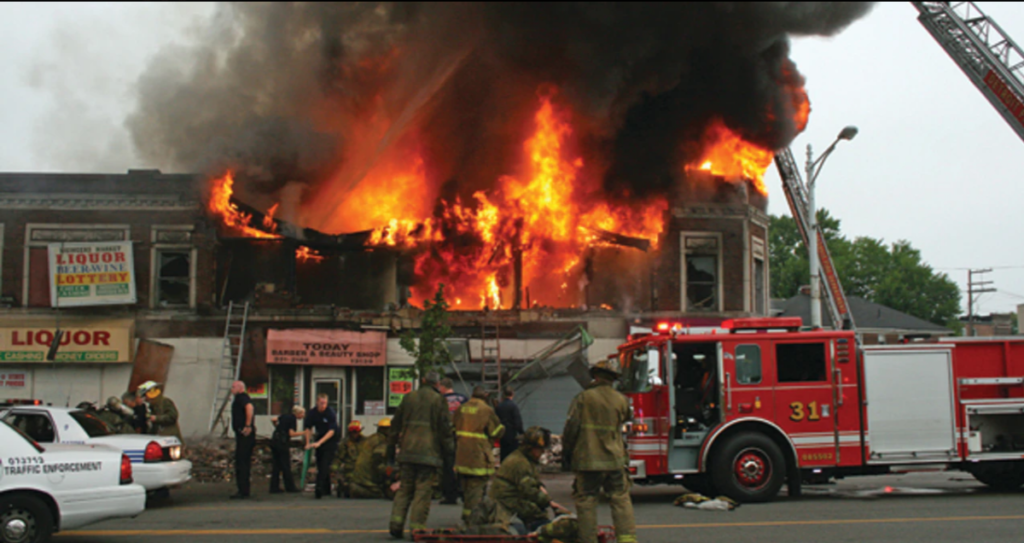