The trucks were responding to a fire on Main Street when they smashed into one another at Broadway and Straight Street before 6 p.m., department officials said. One of the trucks reportedly crashed into a nearby building.

Eight firefighters were hurt and rushed to a nearby hospital, and one was said to be in bad shape. The Paterson fire chief was headed to the hospital to check on the injured firefighters.

The crash occurred less than half of a mile down the street from the house, which had grown to at least three alarms Saturday night. 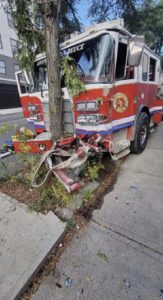