Irving, TX, Fire Chief Victor Conley distinctly remembers the incident that prompted him to look into the effectiveness of using older fire apparatus as “blockers” in order to protect firefighters and other first responders at traffic scenes.

He was at the National Fire Academy in July 2015 when he received a call about a collision involving one of his department’s ladder trucks that had been blocking out traffic at an accident.

“An 18-wheeler, fully loaded, rear-ended the back of this ladder truck, which weighs approximately 30 tons, fully loaded. And it spun the ladder truck 180 degrees and rolled it 360,” Conley said. “Needless to say, it totaled our fire apparatus, and the driver of the 18 wheeler died in the incident.”

“And while we were blocking that mess, we had another DWI driver run into the back of a police squad car,” he added.

Three firefighters were injured in the crash with the ladder apparatus, and it took months for them to recover and return to their posts. While the department already used vehicles to keep personnel safe at high-traffic scenes, the 2015 incident spurred Conley to develop even better protective measures for first responders and the department’s front line equipment. 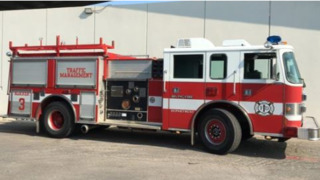 That same year, as part of his academy project to enhance how the department handles specific emergency scenarios in the community, the chief looked at similar incidents over a five-year span in Irving. Here’s what he discovered:

Armed with that information, Conley wrote his academy paper, which provided the blueprint for Irving’s blocker program. But it wasn’t until 2017—nearly two years later—that city officially adopted it.

“Typically with fire departments, there are two things they don’t like: They don’t like for things to stay the same, and they also don’t like change,” Conley said. “This was a change in the whole philosophy of what we were doing, and they didn’t like it at first because it’s just another piece of equipment they have to keep up with and utilize at the scene. But once they’d seen the effectiveness of what the program does … now we’ve seen wide support of it.”

Out with the New, In with the Old

Obviously, safety is the blocker program’s first priority, but Conley emphasized how inexpensive it is to maintain. Unlike the way Irving’s FD had been using apparatus as blockers, the new approach assigned protective duty only to older, outdated units—typically pieces about 20 years old and ready to be retired—and not the department’s newer vehicles.

Even though it has been around for about two years, 2019 might be considered the year the program has come into its own. Not only has it earned a statewide safety award this year, but in March, it quite possibly had it’s defining moment. That’s when a blocker was totaled while protecting several police and firefighters from being hit by a car that barreled through a previous crash investigation scene.

“We’ve seen it from the concept phase to the proof phase that (the program) works,” Conley said.

A Concept That’s Catching on

Of course, one of the biggest signs of success has been the interest the blocker program has generated among other fire departments. Conley said he’s had fire officials from around the country and overseas reach out with questions about blockers.

“It’s catching on in our area, and I’ve had other fire chiefs tell me their city manager wants them to implement the program. Slowly but surely … people are learning about the program,” he said.

In April, nearby Dallas Fire Rescue began using blocker apparatus as part of a pilot program. Over a three-year period, apparatus from that department had been hit 62 times while blocking highway crashes, totaling millions of dollars in repair costs, Assistant Chief Randall Stidham said.

Dallas has two blockers available around the clock, and like Irving —a program DFR officials looked at when creating their own—the department uses older, decommissioned apparatus up for auction. The equipment is stripped from the vehicles, and around 6,000 pounds of sand is loaded into the water tanks.

Using the blockers can reduce the risk to emergency responders working on high-speed roadways, prevent expensive apparatus from being struck, and reduce maintenance/repair time and costs. Blockers don’t necessarily have to be pretty, just functional. 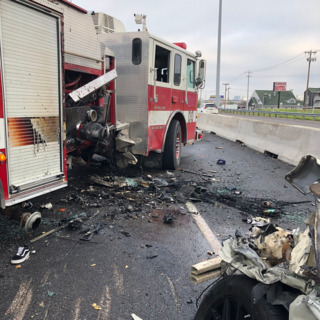 In the first two weeks of DFR’s program, blockers were deployed nearly 120 times, according to Stidham. And just six days into the program, a blocker was hit while protecting the department’s brand new $1.3 million fire apparatus that had been in service for less than a week, he added.

“The blocker did its intended duty in protecting our firefighters and our equipment,” Stidham said.

“The pilot program has already been viewed as a successful initiative within the department. Expectations have been exceeded, with members reporting feeling safer on scene, while DFR apparatus receives better protection. Our members are hoping to see more blockers on the street very soon”

In order to figure out the best way to deploy blockers, Stidham said the department looked at data on blocking accidents since 2016 in order to “geo-fence” those vehicles to the most dangerous parts of the city.

“One area in particular, east of downtown Dallas on Interstate 30, had over a third of all of the blocking accidents during the three-year period,” he said. “By geo-fencing these areas, we isolate the blockers to these two areas. Staffing the blockers around the clock allows the blockers to answer with any truck companies that respond into those areas, not just one.”

Dallas’ approach to blockers highlights an aspect Conley says is vital to the success of these types of programs. Departments shouldn’t look at a blocker as a one-size-fits-all solution to keeping first responders safe. Officials need to tailor their programs to fit their communities, Conley stressed.

Going forward, both Conley and Stidlam believe the blocker programs will continue to develop and grow. For instance, Conley thinks insurance companies might eventually play a role as blockers become a simple way for those businesses to save money.

In a perfect world, though, Conley wishes blockers weren’t a tool fire departments needed to know about.

“What I would rather do, I’d rather educate our community to pay attention to what’s happening on the road. But that hasn’t happened so far, so I have to protect my people and my equipment out on the scene,” he said.