CHICAGO (WLS) — Two children and a firefighter have been injured in a house fire on Chicago’s Far South Side early Wednesday morning.

The blaze broke out just after 3:30 a.m. in the 11000-block of South Edbrooke Avenue in Roseland. 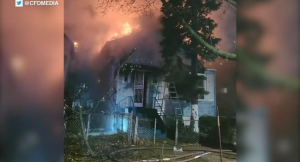 When firefighters arrived, they saw heavy fire in the basement and the third floor and heard reports of people trapped.

Four people were able to get out on their own, including two children and two adults.

A 17-year-old boy, who had to be rescued, was taken to University of Chicago Medical Center in critical condition with burn injuries, a 16-year-old girl was also taken to U of C with minor injuries and a firefighter is being evaluated for minor burns to his face, CFD said.

At one point, there was a “mayday” called out for firefighters in trouble, as the flames suddenly intensified.

“The fire was growing when they were there. It was in two floors already. It was expanding very rapidly,” CFD Deputy Fire Commissioner Brian Helmond said. “Because of the missing person report on the onset of the alarm, they made an aggressive attack, which is very risky, but to save a life, that’s what we do.”

Family members said the 17-year-old boy needed CPR after he was rescued.

He took in a lot of smoke and has burns to his face, chest and arms.

Travis Winfield was asleep when his wife smelled smoke coming from the basement of their Roseland home.

“When I got to the basement and opened the door, a bunch of smoke came from the basement, so once I seen that much smoke, I just ran and got my kids and got up out of there,” Winfield said.

Winfield, his wife and his two young daughters made it out, but his 17-year-old son, Treyvon, dropped his phone.

“That’s what made him turn back around to go try to get his phone, and I guess the smoke caught him and kind of knocked him out ’cause I was still looking for him, and I tried to go back in, but I couldn’t see nothing. There was nothing but black smoke,” he said.

Firefighters rescued Treyvon and his girlfriend.

Both were injured by the smoke and flames.

The blaze was put out after about two hours.

At one point, over 100 firefighters were on the scene.

The one-and-a-half story single-family house was still standing later Wednesday morning, but city officials are concerned it could collapse.

Winfield is just happy his family made it out alive.

“As long as we came out alive, you know. That’s all I was really worried about because for a minute I thought my son was not gonna make it out of there, but thank God for the firefighters,” he said.

It was not immediately clear what caused the fire.