The Grand Prairie (TX) Fire Department has retrofitted two reserve engines with TrafFix Devices Scorpion Crash Attenuators to protect personnel working at incident scenes and reduce injuries/fatalities for occupants in a vehicle that collides with stationary emergency apparatus serving as “blocking”/protection apparatus at a scene.

The Scorpion II Truck Mounted Attenuator (TMA) is a mobile crash cushion attached to the rear of a support vehicle’s frame. It can be used on moving “shadow” apparatus, on stationary “block” vehicles (engines), or on advanced warning vehicles deployed “upstream” of a moving or stationary operation.

When impacted, the Scorpion’s modular design crushes in progressive stages, which reduces the impact forces on the vehicles occupants and results in lower repair costs and easy parts replacement (See photo series). 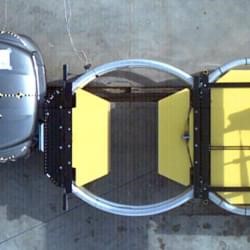 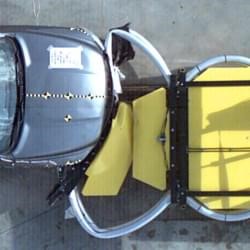 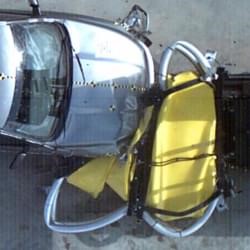 The curved side rails are made from corrosion resistant aluminum tubes and offer full width impact protection along the entire length of the Scorpion II by safely redirecting the impacting vehicle away from the deadly “coffin corners” at the rear of the truck. Unlike the Scorpion II, most other manufacturers Crash Attenuator models have little or no side-angle impact protection.

The photos shown here show “Scorpion 3,” one of two identical Grand Prairie Fire Dept. reserve engines outfitted with the Scorpion devices. One of these engines is always in service with an assigned full-time engineer driver/engineer so it can respond immediately to a dangerous traffic incident scene. The engines’ pump and water tank are fully functional, so they can serve as more than just a scene safety “blocker” engine.

Tanksley was killed on February 10, 2014, when he was hit by a car and thrown from an icy highway overpass while working an accident scene.

Hill was struck and killed along with police officer Nicholas Reyna while working at the scene of an icy accident scene on January 11, 2020. A second firefighter was hospitalized in critical condition following the incident on Interstate 27 in Lubbock. The emergency responders arrived at the scene of a single-vehicle accident. While they were there, a second vehicle towing a trailer crossed the median about 25 yards from the first accident. A third vehicle then crossed and struck the two firefighters and officer Reyna.

The TMA’s integrated lighting consists of LED brake, directional, signal and running lights for enhancement of advanced warning to drivers.

The Scorpion II TMA consists of three main components: Strut, Cartridge, and backup/diaphragm frames. The Strut and Cartridge are the energy attenuation components.

When fully deployed, the Scorpion II TMA is only 13′ (4 m) in length, compared to other manufacturers units which are over 19′ (5.8 m), thus giving the Scorpion II the shortest overall length of any MASH Eligible Truck Mounted Attenuator on the market. This shorter length reduces incidental impacts and repair costs while still providing the best safety and reliability you have come to expect from the Scorpion line of crash attenuators.

The Scorpion II TMA is compatible with the Doctor Air Brake® automatic braking system that instantly locks the brakes of the host vehicle upon impact, further protecting the driver of the TMA truck, occupants of the impacting vehicle, and any bystanders or workers near the crash.

In 2016, The Dallas County Sheriff’s Dept. purchased two Scorpion Trucks and stationed them at facilities near interstates 45 and 20, and in downtown Dallas, ready to roll when needed at emergency scenes.